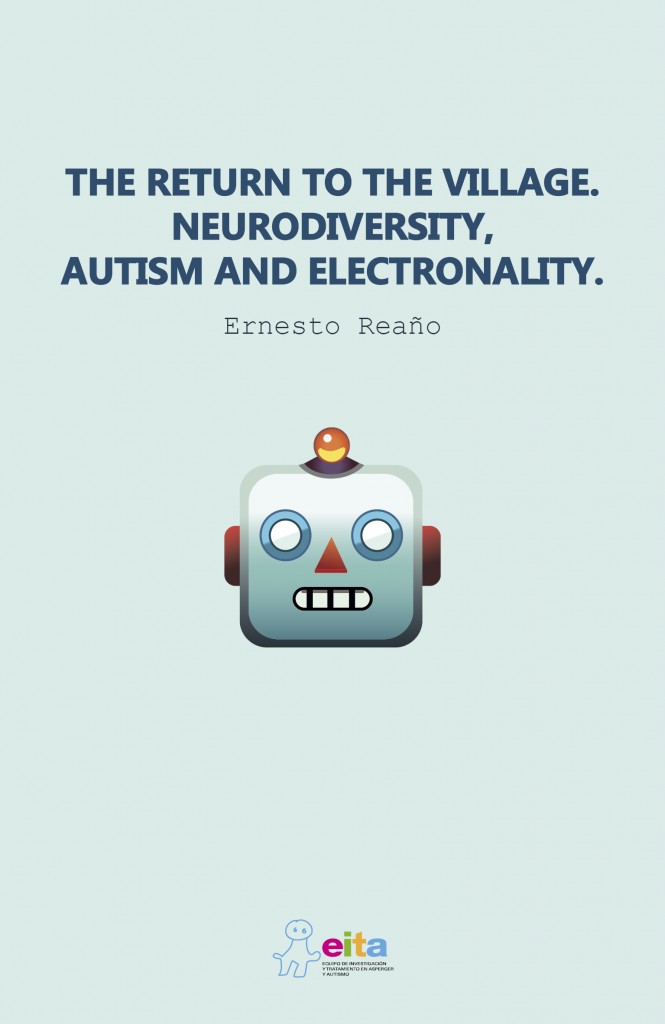 “To be nobody but yourself in a world which is doing its best day and night to make you like everybody else means to fight the hardest battle which any human being can fight and never stop fighting”.

“The return to the village” could be considered as an excellent marriage of research based information, science, linguistics, communication, philosophy, ethics and of course electronality. It obliges the reader to re-think many topics such as the so-called neurotypical development and thinking, and even other paradigms about society, history and life itself. It is a book with a vision, it is convincing and written with knowledge, respect and enthusiasm. It obliges the reader to reflect upon important issues.

It is quite innovating to write about Neurodiversity making the link with technologies as an important subject for research and practice. Ernesto Reaño is extremely good at explaining the link between the autistic brain and electronality. Thought in detail, divergent thinking, systematizing… are explained to the reader as skills and not as disabilities.

Different perceptual systems provide incredible richness, as they provide a different decoding and interpretation of reality.

Reading this book -in a certain way- made me come back to my own thoughts when I was asked a few years ago to write an article on the first chapter of the “Charter of Rights” for Persons with Autism. One of my biggest considerations was the concept of “having rights”, of “inclusion” and everything that goes together with that. I wrote that I did not like the word inclusion because my consideration is who are “we” (or “they”?), I mean the so-called normal people or neurotypical ones, to “include”? Read: to give another person the right to ‘come in’, ‘to join us’… Every human being is born to belong! Diversity is part of mankind. It is more a question of living together.

It seems very clear to me –and it is also pointed out in Ernesto Reaño’s book- that autism is not a disease, nor a disorder, but an atypical condition of human neurodevelopment and therefor there is no cure for it.

Neurotypicals tend to try to find a cure for everything that is deviating from ‘the norm’. And, when they do not succeed, then they try to get different people as close as possible to that ‘norm’. But who decides upon this ‘norm’? And what do people with autism themselves think about it?

There is much more beyond the title of this book and beyond the well-studied topic of neurodiversity and electronality. It is an ode to neurodiversity, written with much respect and forcing the reader to reflect upon mankind.

The author shares with us various insights in different historical evolutions, in what he calls “From nomadism to the culture of autism”, “The West and the birth of normality” and “From the culture of disability to our electronal era”, quoting important authors in the field, such as Armstrong (2010) and Silberman (2015), describing us a real fundamental basis for his explanation of electronality later on.

When giving lectures, I often get asked if nowadays we can talk about an “epidemic” of autism… Let me, on my turn, quote those important authors. The history of our DNA states, according to Silberman (2015), that autism goes as back as our origins. Autism genes have always been present in the general population. It would be weird to think that autism exists since the word ‘autism’ exists and has been described in literature.

On the other hand, in autism we find what is referred to as “selective pairing” (Baron-Cohen, 2008): individuals with autism find environments where they are able to find their peers (e.g. Silicon Valley) and “assortative mating” (Silberman, 2015): “attraction between people with similar genetic traits”. It seems that in places where technology industry is concentrated a higher concentration of people with autism or with autistic traits can be find, as well as more births.

Electronality is favorable for autistic life!

If it is favorable for autistic life we should go into the footsteps of Armstrong (2011) and try to create ‘niches’ for persons with autism. He states that whether you are born or called “disabled” or “gifted” often depends upon the place (and the time) where you are born. In Ernesto Reaño’s book neurodiversity is clearly considered not as a deficit but a difference.

Temple Grandin, in “Thinking in Pictures” regarded her autism as “different, not less”.

It’s up to the neurotypicals to try to understand those differences.

“It was like having a brain with no sieve…” (Donna Williams).

People with autism, during many years already, often are being described as people from another ‘culture’.

If we follow this idea and if we think more thoroughly about it, we could say that a different culture could have his different cultural system and this is why Ernesto Reaño’s book is a must-read: he explains and shows the reader that “electronality has made users give sense to reality in a different way.”

It helps neurotypicals to try to make a kind of new switch towards the autistic type of mind. The electronic age forces us to make our mind operate in a way that is similar to the one used in neurodiverse processing.

In a very interesting part on communication, the author explains that we cannot find the emergence of a complete scene of joint attention, a basis for the so-called ‘theory of mind’ in the autistic brain. He refers a.o. to the work of Tomasello (1997) and uses the word “cognitive revolution’. It goes without saying that also socio-communicative foundations are mentioned.

But then he respectfully comes to the point that it is society, read: the neurotypicals, who consider these socio-communicative capacities necessary to have a life worth living.

Let’s put ourselves in question:

Are “joint attention and/or social interactions” fundamental for every mind or could we also talk about “connectivity and/or interconnectivity”? The latter does not necessarily imply social interaction… Electronality puts neurodivergent thinkers in a much more comfortable position!

It’s about time that we (re)think the concept of quality of life and take into account that it may be different for each individual.

It is crystal clear what the author explains to us: persons with autism systematize because this is how their brain works. A neurotypical brain categorizes and conceptualizes, but if you think in details, the concept is a system in itself. Where the neurotypical brain sees similarities, the brain with autism lists up and sees differences, going from parts to the wholes.

“I realized my thinking was different when I asked other people to think about church steeples. Most people see in their imagination a generalized generic steeple. I see only specific pictures of steeples I have observed. They flash into my memory like a series of still Googled pictures” (Temple Grandin).

Temple Grandin states that all her thinking uses specific examples to create concepts, she calls it “Bottom up Thinking” and not “Top down Thinking”.

If the brain looks for differences and not for similarities, the mind associates detail by detail…

By the way, I forgot to tell the reader that I read this book on my MacBook Air but I am writing this foreword on my Asus. Whether this is important information or not depends upon how your brain works.

Why do we think that people with autism understand language in a too “narrow” way? We should say the opposite: they understand in a much precise way! It’s logical that this takes much more time… but it could be considered as a talent.

Viewed from a positive angle: it is the capacity for systematization that privileges the autistic mind over the capacity to empathize. And even more positive: the systematizing mind is mentioned and connected directly with the word ‘talent’.

The different forms of electronality favor diversity. People with autism process from parts to the whole (processing in detail) “processing by closeness” (Reaño).

Sense is cognitively produced in the electronic word, when writing a text with the use of acronyms, deletion of vowels and thinking of the use of emoji the missing extra-linguistic and para-verbal elements are added! The emergence of a language of emotions is helpful for a person with autism to overcome the problems of neurotypical interaction and communication. It goes without saying but it is extremely important to mention that electronality favors the production of meaning and expression of non-verbal people with autism as well!

“The return to the Village” is not only a very interesting book in matters of its content, but also a sign of hope. Hope for a better quality of life for everybody: for neurodiverse people, their parents, family, network and for professionals. And also for the neurotypicals, once they stop trying to ‘normalize’ everything and begin to see the richness in neurodiversity.

“If by some magic, autism had been eradicated from the face of the earth, then men would still be socializing in front of a wood fire at the entrance to a cave” (Temple Grandin).

Neurodiverse people should not be considered as extra-terrestrials or should not feel exiled from our planet  but  as people who think differently and for whom many things have changed and could change in the future  in a positive way thanks to the digital, electronic and cybernetic world.

This is an excellent book, a must-read for everybody interested in “mankind” and in “humanity”… I should add even in “anthropology…

IT IS TIME FOR REPATRIATION!!!

Licentiate in Germanic Philology:  University Of Ghent (Dept. Philosophy and Literature, Master). Belgium. TEACCH-affiliated (University North Carolina, Chapel Hill). Parent-Professional (and Professional Parent), became director of the Centre for Training on Autism, Belgium, Antwerp.Worldwide experience with theoretical and practical conferences and workshops on different topics. Author of books and articles on autism: e.g. on Detail thinking in autism.  “Mum is that a human being an animal?” and “Autism from within.” Both books has been translated in several languages. Is member of the International Associate Editors of ‘Good Autism Practice’. At this moment, she works as an independent trainer in autism and as a consultant and coach in the field of autism.

The return to the village. Neurodiversity, autism and electronality.